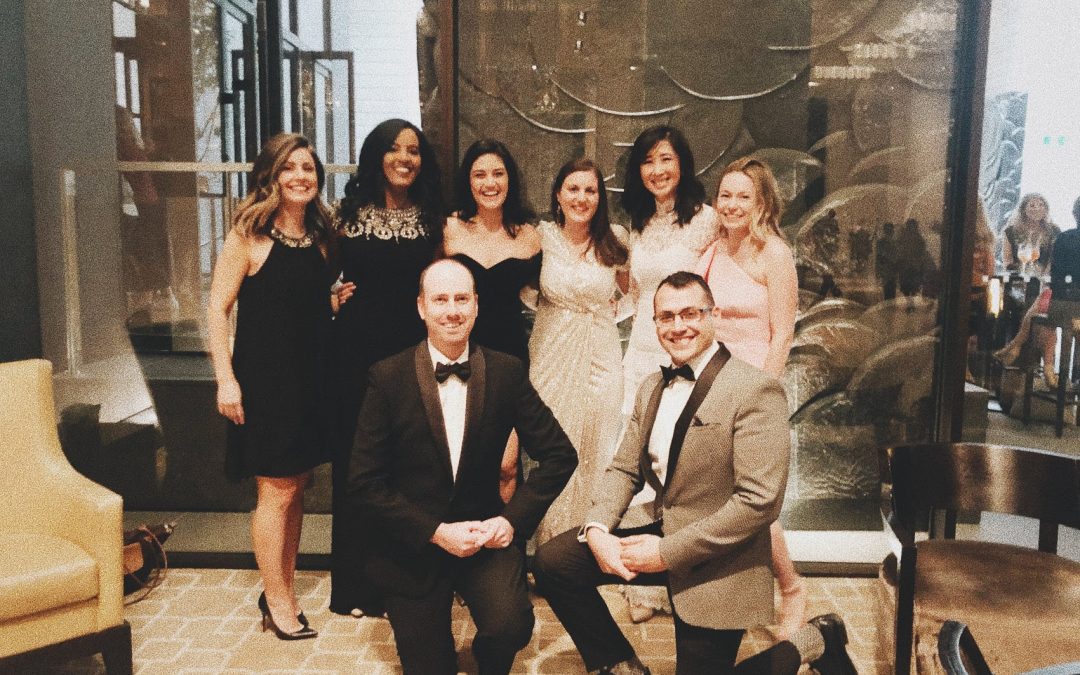 *Photo: Team Legal at the Women in Law Awards 2019

This is an unedited version of the original article that was published in the Association of Corporate Counsel Australia’s Corporate Lawyer Magazine, November Summer Edition 2019.

Lawyers are trained to work as lone wolves. We all remember our university days when it was all about studying hard and getting the best marks, sprinkled with a few extra-curricular activities so we could land clerkships and graduate roles with the top firms. This hasn’t changed a great deal over the years; it is still the experience of many law students and graduates today. Sure, not all law students aspire to follow the private practice path, but it certainly is the most common and talked about road in those penultimate law school years. Then, as graduates in reputable firms, you are in some sense pitted against each other, chasing one billable hour after another. All to move up the rungs on that challenging and sometimes elusive partnership ladder.

When you turn your mind to it, we can see that this foray into the working world gives lawyers an inclination towards focusing on individualised goals and success. Which inherently tends to neglect important capabilities likes fostering collaboration, team-work or other leadership skills required to establish, manage, motivate or work together as an effective team. Why are those attributes important? Because if you want to grow a career as an in-house practitioner, they are the hallmarks of successful in-house lawyers and teams.

Why does team work matter?

The industries we all work in today are affected in some way or other by the fourth industrial revolution. Every direction we turn we have abstract concepts like innovation, gig-economy, tech and agile thrust in our faces, often leaving lawyers perplexed as to how to engage on these drivers of change that their organisations are grappling with.

Expectations of businesses from consumers are higher than before which means there are greater complexities and demands organisations need to address; this is no truer than for the financial services industry at the moment, following the conclusion of the Royal Commission into Misconduct in the Banking, Superannuation and Financial Services Industry. Our environments are all subject to challenging VUCA times and more than ever lawyers need to be better at delivering value and ensuring they can contribute meaningfully to the strategic objectives of their businesses. You can’t do this alone. The business issues of today are not solved by any one person. They need teams of great people to all play their part in devising ideas, planning and implementing solutions and legal teams are key players in those steps. It is vital that individuals are team players not only within their legal teams, but also with the rest of their organisation.

What does Google think about what makes effective teams?

So how do lawyers get better at lawyering as part of a pack? A fundamental shift in mindset is necessary. Google did a great job in its recent research and analysis of its own internal high performing teams to understand what elements drive their success. The outputs of that research are useful especially for lawyers to turn to minds to in understanding what skills they need to be focusing on to professionally grow. Perhaps not too surprising was their finding that, “Who is on a team matters less than how the team members interact, structure their work, and view their contributions”. That is, the effectiveness of a team is not determined by a group of individuals who are all capable and hyper-intelligent, but rather the presence of five key attributes. These being the following:

Worth highlighting in particular is that the number one factor Google found to be core to those high performing teams was the presence of psychological safety in the team environment. Put simply this is the notion that each member of a team feels safe to put forward thoughts and ideas without fear of judgement or ridicule. And perhaps a safety in being vulnerable amongst team members. We can see how legal structures and the culture of the profession, typically hierarchical and conservative in nature, would indeed create fear of judgement, failure, and being incorrect. I won’t summarise the findings here but I do highly recommend readers have a look at the Google research, it is indeed a fascinating read especially when you apply it to the context of the legal industry.

Having regard to those five criteria identified in the Google research, the following are four basic behaviours and practices that I have road-tested that will go a long way to ensuring we all work better as tribes and achieve the fundamentals of Google’s effective high performing teams.

Valuing and recognising every person’s contribution

We conceptually know this and talk about it all the time, but I think we should challenge ourselves to think about this deeper and consider this from a wider diversity and inclusion lens.

I recently came across some research by Beyond Story focused on the different behavioural work inclinations of individuals that identified as Australians versus Asian-Australians. When the researchers presented their findings, one of the outcomes that stood out was the idea that certain clusters of tasks, skills and work preferences are favoured more by one group over the other which in turn manifests in different roles individuals are more likely to fall into, not necessarily consciously or by design.

For example, Asian-Australians are typically less inclined to voice their views in group environments, suggesting a cultural influence on behavioural inclinations such as absorbing and digesting information before forming an opinion and subsequently asserting that view. The recommendation from the research was for organisational leaders to recognise this and not penalise whether conscious or unconsciously that behaviour in assessing the contributions and value of those individuals. Or put differently: avoid looking for the extroverted behaviour that we might culturally be inclined to see as representative of an individual valuably contributing. And instead identify and apply the different forms in which value and contribution can be measured.

Now whilst this is a specific finding, it can practically apply in a much broader fashion to challenge unconscious biases we have in what we conceive to be valued attributes of a team member. As lawyers we have all had the technical training that shapes the way we might view or approach something, and with that comes a set of biases, similarly to how cultural upbringing does the same. It’s important to challenge those biases. Be conscious of giving people in your team the opportunity to speak, invite the views of those less inclined to be vocal, change the structure in which meetings are held to make different people comfortable and break any patterns. These are all simple things we should be mindful of practising to foster healthy, collaborative and psychologically safe environments where everyone can be recognised for the value they personally bring, as opposed to recognising only attributes that come from biased perspectives.

There has been a lot of research about growth mindsets in the context of leadership and managing people, most famously by Dr Carol Dweck. “Fixed” and “Growth” mindsets describe the underlying beliefs people have about learning and intelligence. What is of particular relevance is how we adopt growth mindsets when interacting with our team members whether with managers, direct-reports or peers. Challenge yourself to rethink and question your view of members of your team and your conception of what they’re good or not good at. This again challenges the mould we might place ourselves or our colleagues in which can get in the way of effective team work if those moulds aren’t actually correct or, alternatively just makes everyone complacent rather than continuously trying to improve and learn.

This is about having clarity in a team strategy. Beyond the individual day to day tasks each person works on, it’s incredibly important for each team member to be on board with how those day to day tasks are contributing to a broader team objective. It goes without saying that with this level of collective team buy-in that this will drive a unified goal that gives individuals a sense of purpose in what they’re working on and a belief that the work they do is valued and matters. This is because it moves the focus away from a task-based achievement or objective to a broad-based strategic goal. If you work in a team where it seems unclear what the collective objectives of your work are, challenge the team or have a conversation with your manager about finding that common strategic objective.

I was in a board meeting once where there was a training session spent discussing the expectations of directors and accepted practices. One board member immediately mentioned the training handbook everyone received when inducted onto the board, which as you might imagine detailed all the somewhat standard codes of conduct and duties a director has. What was missing and is rarely written down in those usual types of training material is an articulation of the culturally accepted practices of an organisation – things that aren’t written down (and probably shouldn’t/can’t be!) but make up the fabric of a team, boardroom or organisation. Yet these are the rules of play that can either foster or erode the health of team culture, so due attention to them must be paid.

A very simple example is punctuality. We all have certain people in our businesses or teams that we know are notoriously always late to meetings. Left unspoken, that becomes an accepted behaviour and practice either for the team or (possibly worse) for that one person – which may be fine as long as you are okay with that acceptance establishing lateness as a cultural norm.  Another good example is the “no triangles” rule – a term coined by Rachael Robertson in the context of her leadership of her team to Antarctica. It describes her no tolerance approach to “triangle” conversations; ie. talking about someone to another if there is an issue rather than talking to the person directly to resolve it. This behaviour builds distrust and so applying a no triangles behavioural standard in teams helps to create a team environment of transparency and openness.

Being the best in-house team-players

It’s a lot to think about on top of the demands of business as usual; but team building and turning our minds to how we keep working on these soft skills is crucial to having the ability to keep up with the pace of change and continue to be the best lawyers we can be.

The first thing most lawyers need to learn when going corporate is that the perspectives they hold have to shift. Those ingrained views that have been shaped by years of high achievement, law school, billable hours and individualised success measures have to go out the window. Because in-house lawyering requires an attitudinal change to what is important about your role. Rather than looking at a problem and crafting an advice about what the law is, being an internal adviser is more about the delivery. Ensuring that teams can understand, appreciate and operationalise the legals – less about the objective technical output and more about the interpersonal impact. Bringing the business along the journey of mitigating legal risk. Yes, you still need to be strong at the technical, but even more importantly you need to empathise with people and know how to meet their needs whilst still fulfilling the legal obligations of the organisation. Again, you can’t do it alone; you need to work cohesively as a legal unit to achieve this.

Which brings us full circle and back to the importance of teams – successful internal counsel are perceived as members of every team in the organisation, not just legal. And at their strongest, they are the goalies working symbiotically with every striker, for the team win.